The Euro Mountain Sheparnese, a Bernese Mountain Dog German Shepherd mix is a dog that just recently came into the spotlight of the breeding world. Cross-breeding doesn’t always produce great results: often it involves severely compromising a dog’s health and lifespan, as in with the case of dachshunds or pugs. However, whoever decided to cross-breed a Bernese Mountain Dog and a German Shepherd, seemed to know exactly what they were doing. These two breeds are physically very compatible and seem to complement each other in a very fine way, producing a dog with great physical qualities, a beautiful exterior and a level temperament. 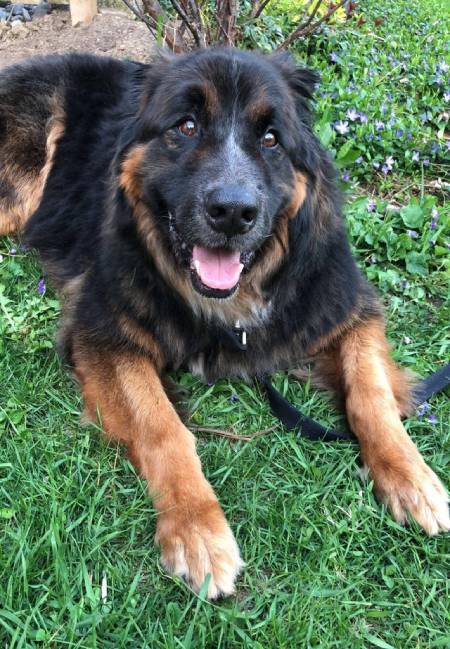 Both German Shepherds and Berners, although quite different from each other, are dogs with the remarkable physique. A German Shepherd is a dog of a medium to large size, with an elongated body shape, well-muscled, strong and well-built. It is normally up to 65 cm (26 in) in height for males and 60 cm (23 in) for females. An average German Shepherd can weigh anywhere from 30kg to 40kg (66-88lb) for males and 25-30kg for females. The head is wedge-shaped, with vertically standing, forward-oriented ears. The coat is medium-length, fairly thick and has an undercoat. Physically, a German shepherd is a powerful dog with high-endurance, capable of running a fairly long distance. A Bernese Mountain Dog is a large dog, reaching up to 70 cm (27.5”) in height and weighing anywhere from 30kg to 40kg (66-88lb). The coat is thick and of medium length, silky but never curly. The  head is of a rounded shape, the ears lie flat (except in the moments of excitement).  The body is well-muscled and strong. According to the breed standard, a Bernese Mountain Dog will possess certain endurance and be fit for extended periods of work outside, but it isn’t a very quick dog and is not suited for fast, long-distance running. 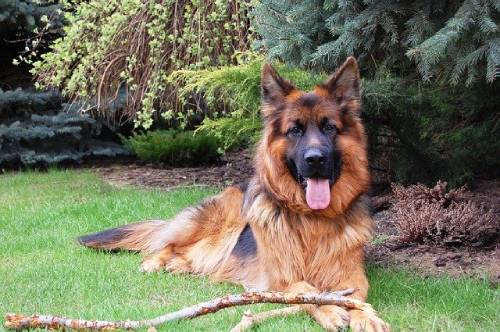 A Bernese Mountain Dog – German Shepherd mix, or the Euro Mountain Sheparnese, will have some combination of these physical traits, depending on what traits will be inherited from which parent. In general, the resulting dog is a little smaller than a Bernese Mountain dog, with strong, well-built body, well-developed muscles and a medium-length coat. 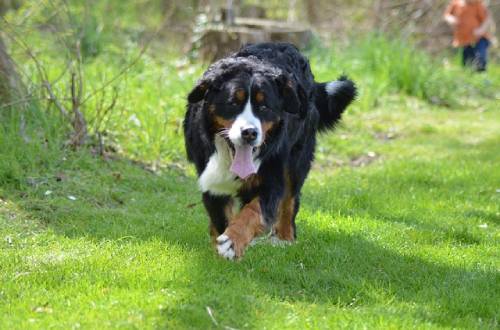 The color of the coat can vary, but generally, it is black and brown after the German Shepherd, occasionally featuring a white chest from the Bernese, or white spotting on the forehead. The ears of the pup may be vertical or lying flat. The tail will not curl as neither German Shepherds nor Bernese Mountain dogs have curling tails. Both German Shepherds and Bernese Mountain Dogs were originally shepherding dogs. German Shepherds were used to herd and protect the flocks of sheep and herds of larger cattle. They were also used to protect both the herds and he farmer’s house as well as his family. A dog that resulted from hundreds of years of breeding for those purposes is a well-temperamented, highly intelligent, non-aggressive, without a very strong prey drive so as not to hurt the farm animals, and friendly towards owners, but cautious towards strangers.

A well-bred and well-raised German shepherd will be safe for people, sociable, striving for contact with their owners and families, devoted, motivated and generally happy. This is an easy to train and easy to control dog, provided a necessary amount of work is invested into training. It is well adapted to living outdoors and inside, in various climate conditions, excited to be highly active but also capable of relaxing. Since German Shepherds were used in guarding and police work as well as as a farm animal, their guarding instincts are well developed. The German Shepherd is polite, but not necessarily outwardly friendly towards strangers. 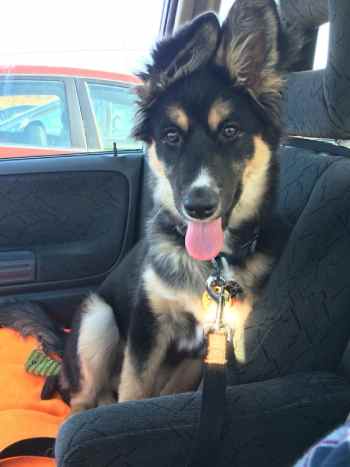 Sheparnese are highly intelligent and eager to socialize with people

Bernese Mountain Dog has always been used for centuries as a farming dog: to help with the herds and also to pull carts with produce and supplies. It is a calm, almost docile dog with a very steady temperament, friendly towards people, with almost non-existent prey drive. You can trust this dog with small animals as well as children. Due to their docile nature, the Bernese have never been used as guard dogs, although they are very devoted to their families and will protect their own if attacked.

The Bernese thrive in the outdoor environments where they get a lot of activity or work. They adore walks outside, as well as hikes, playing in the park or “herding”your little children before they can run too far away.

A mix of a Bernese Mountain Dog and German Shepherd will display some combination of these traits, but it is hard to say what exactly the character of a particular dog will be like. You can expect a loyal, dedicated dog that loves their family and is ready to protect its people. Some pups may be very docile like the Bernese, others could be on a more aggressive side  and very capable of guarding or police work due to their German Shepherd lineage. Regardless, the Sheparnese will be highly intelligent and eager to socialize with people. It will be a dog reveling in working with people and highly trainable. As with any large dog, proper training and socialization is necessary with this mix. Proper socialization from an early age helps get the puppy used to being in a variety of situations and dealing with different types of people (including children) and animals. Emphasis on training is important to establish correct pack roles: it helps your dog understand that you are the leader and the one the dog needs to obey.  A large dog like Bernese Mountain Dog – German Shepherd mix needs to be fully controlled in any public situation as well as within the confines of your own home, if you want to be sure the dog is safe to you and your family.

If the owner doesn’t have enough time and desire to invest in their dog, their Sheparnese may display some less pleasant temperament traits. Lack of socialization may lead to nervousness or even aggression. Lack of training can result in the dog not accepting the owner for the leader of the pack. Such dog may be harder or impossible to control.  These factors, combined with the size and strength of the dog, may lead it to become a danger to the owner and society.

As with all mixes, it is important to know what health issues the dog’s parents may have (from both breeds) so that you have a clear picture of how healthy (or not) the crossbreed will be. German Shepherds are a fairly healthy breed, provided they are well-bred. Just like the Bernese, German Shepherds can often have hip dysplasia. It affects the dog’s joints, leading to limpness, weakness of the dog’s legs, fatigue or even palsy. Various treatments are available, including pain relievers and steroid injections, as well as surgery. Apart from genetic predisposition, hip dysplasia can a result of the dog being overweight, vitamin deficiencies, and too much stress on the joints during puppyhood. As you can see, both Bernese and German Shepherds are affected by hip dysplasia. Because of that, there is a considerable chance that your Bernese Mountain Dog German Shepherd mix might encounter this issue. Watch out for the symptoms, such as limpness, leg weakness and unexplained fatigue in your dog, so you can help them in time.

Another serious health issue that German Shepherds are prone to and that your Bernese Mountain Dog – German Shepherd mix may inherit is pancreatic insufficiency. This condition is characterized by an inability to produce pancreatic enzymes for successful digestion of food. Pancreatic insufficiency results in multiple vitamin and mineral  deficiencies and may lead to other health issues.

Most common symptoms of pancreatic insufficiency include indigestion, diarrhea, worsened quality of the dog’s coat, nails and teeth, developmental delays and fatigue. Normally, pancreatic insufficiency in your Bernese Mountain Dog – German Shepherd mix can’t be reversed or fixed. You can only help your pup improve their digestion by giving them digestive enzymes which have to be prescribed by your vet. 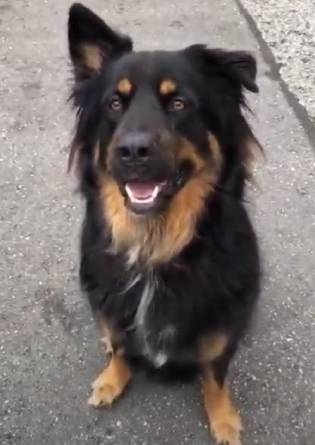 The color of the coat can vary, but generally it is black and brown after the German Shepherd

Epilepsy is somewhat common in German Shepherds and can definitely be genetically passed on to your Bernese Mountain Dog – German Shepherd mix. During an epileptic seizure, a dog experiences increased electrical activity in its neurons and loses control over its body, succumbing to uncontrolled, shaking, chaotic movements. Before the seizure the dog may experience agitation, excess salivation, uncontrolled bowel movements or uncontrolled peeing. Epilepsy cannot be cured, only managed.

If your Bernese Mountain Dog German Shepherd mix has epilepsy, you will need to constantly monitor it and be ready to help during a seizure, which may include helping the dog not to suffocate or not to hurt itself while falling. 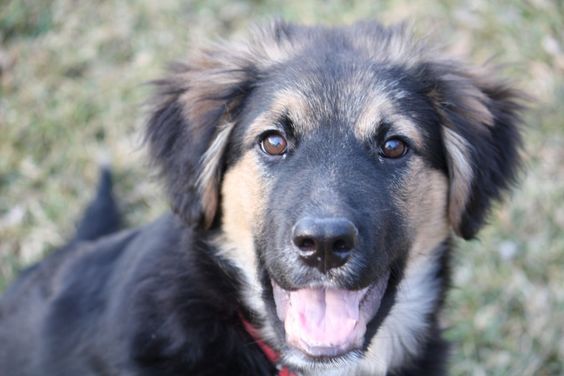 These are only a few health conditions that your Bernese Mountain Dog German Shepherd mix can inherit from their Bernese and German Shepherd parents. However, those aren’t common conditions, and it is very likely your Sheparnese will be perfectly healthy and happy.

With such two great breeds for parents, a Bernese Mountain Dog German Shepherd mix is usually a gorgeous dog, powerful and strong, but also loyal, loving and good-tempered if you raise it correctly.