As you may have read in my article on Bernese Mountain Dog origins, Berners were bred as shepherding and working dog that helped people with herds of cattle and sheep on the farms, as well as pulled carts with produce and also protected both the cattle and the farm with all its dwellers.

What do we know about the second “parent” of our Bernese Mountain Dog Golden Retriever Mix? 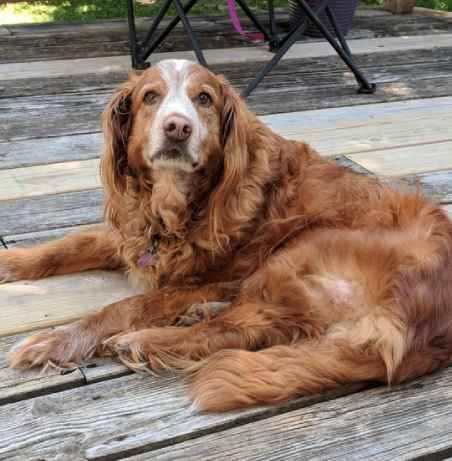 This is a cheerful, happy, outgoing and loving dog, very well suited for being a family pet.
Image source: Reddit

Golden Retriever was established as a breed in the 1800s. It originated in Scotland where it was bred from older types of retrievers. (Most likely, a yellow retriever was used. It had a short coat and the so-called tweed retriever that had a longer, rougher, thicker, curlier coat).

The original purpose of breeding Goldens was to create a robust, motivated dog. It had to have high endurance and be capable of working both on land and on the water as a hunting (retrieving) dog. The result was a highly energetic, powerful, strong and active dog that thrived in hunting/retrieving both on the land and in water and was highly popular among hunters. When it wasn’t hunting, it was a happy, relaxed, friendly and highly sociable family dog. 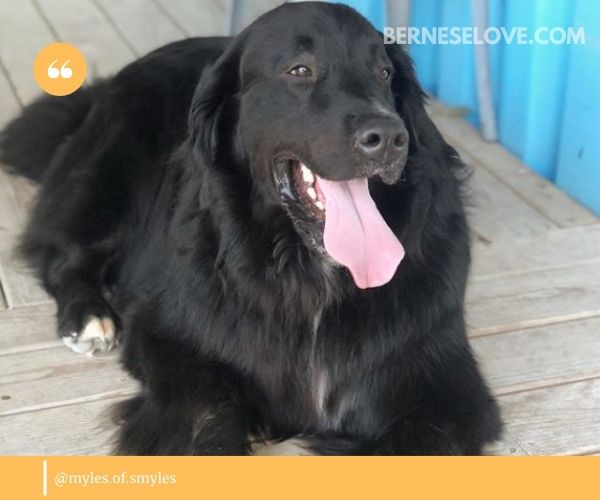 Golden’s happy disposition, excellent working qualities, friendly temperament and easy trainability helped it become one of the most popular breeds of dogs today. This is why the mixes of this dog with other breeds, such as Bernese Mountain Dog Golden Retriever mix, are highly popular.

A Bernegol (Bernese Mountain Dog Golden Retriever Mix), when bred from a Berner and a Golden, can potentially inherit the looks of both parents in varying degrees. A purebred Berner is a large, robust, muscular dog, somewhat heavy, with a thick coat and rounded large head. A Berner coat is always tricolored, with distinctive markings on the body and face.

A Golden Retriever is a medium-sized dog, with a slightly triangular-shaped skull and hanging ears, a strong, muscular body, not very tall. The coat is of sandy or “golden” color, with water-resistant qualities which evolved from breeding specifically for working in the water. The color of the coat can slightly vary but cannot be red or brown. 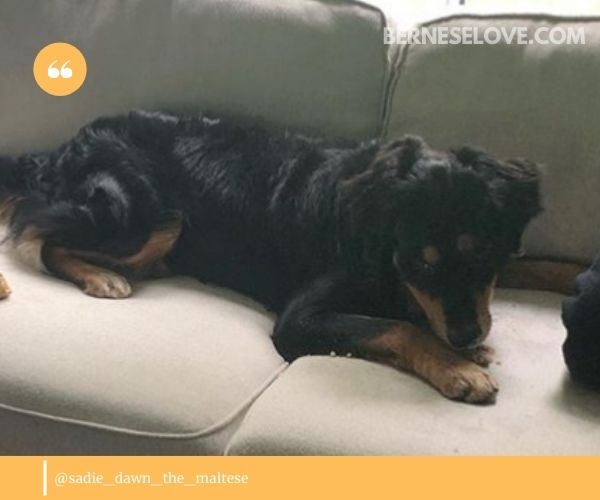 A Bernese Mountain Dog Golden Retriever Mix can look more like a Berner or like a Golden. In general, it’s a medium-sized dog with a somewhat less thick coat than a Berner’s, but lighter like Golden’s. It is often tricolored like a Berner, but markings don’t always create the classic “Berner” look: the chest is not always white and there may not be a white mark on the face. The coat may be lighter and more silky and tender than a Berner’s if the dog inherits more of a Golden coat, although it may not possess great water-resistant qualities.

The temperament of the mix can also be inherited from both parents and will likely be a combination of both breeds. This is where the Bernese Mountain Dog Golden Retriever Mix will shine. Both breeds have what can be honestly called an excellent temperament.

Bernese Mountain Dogs are confident, friendly, devoted and generally mild-temperamented dogs. Sometimes they can even be called docile. They aren’t as quick thinkers as they are thorough and rational.

Golden Retriever, apart from being an excellent partner in hunting, is also a perfect family pet due to their wonderful personality. It is a sociable, friendly dog that is very easy to train. They are quick thinkers and are genetically obedient. Unlike a Berner, Goldens don’t take time to think of whether they would like to please you by obeying your command: they obey first, then think after. Their intelligence and diligence in training make them an easy pet that can learn tricks, protect the family home and be good on a leash after only a few training sessions. 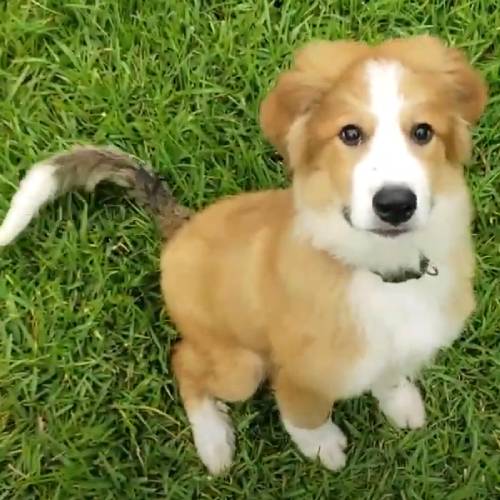 Your dog will inherit these traits from both of the parents. It will be an outgoing, easy to bond with, dedicated and highly intelligent dog. It can be more or less stubborn depending on how much Berner character they inherit. They will be self-confident, but friendly. Both breeds are extremely people-oriented, so you can expect a devoted, loving family member from the mix of both.

Both Berners and Goldens have been bred as working dogs for centuries, which makes their personalities particularly people-oriented and willing to please and do whatever “work” they are asked to do in the modern environment.

The downside of the working past of both breeds is that your Bernese Mountain Dog Golden Retriever Mix will need some “work” to fulfill its genetic needs: a Bernegol will not be happy in a household where no one has time for the dog. As with any dog, but especially a large working dog, you will need to invest time in walking, training and playing with your dog.

It’s ideal if part of your family is at home most of the time (if you are a retired couple, or if there are homeschooled children in the house, etc), so that your Bernegol is not lonely for long periods of time. They will probably be OK even if they are left home while most of the family is at work, but it’s not a great situation, and you may have to compensate for that by carving out a couple of hours after work to walk your dog and otherwise spend active time with them. 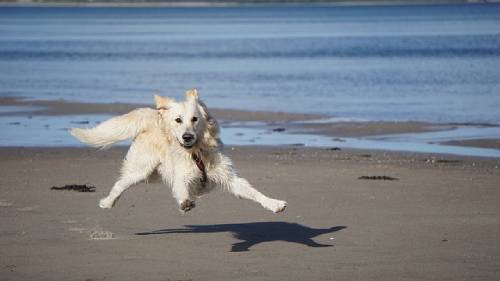 Goldens have a habit of being quite whiny if they don’t get enough attention and exercise, which you Golden-Berner mix may inherit. This is one trait that often leads to owner frustration with the dog. But it is usually simply a result of partial neglect that the dog is experiencing.

Both Berner and Golden are athletic, active dogs, so they won’t thrive if they have to live as couch potatoes. If your family isn’t very active at this stage of life and you don’t like spending lots of time outdoors (say, hiking or walking down a local trail, etc), you may not want to adopt a Bernese Mountain Dog Golden Retriever Mix yet, or any dog, really.

When it comes to lifespan, it’s hard to predict it even for pure breeds. Too many factors come into play, such as the dog’s health, living environment, exercise, activity levels, the mental health of the dog and many more. But generally speaking, Bernese Mountain Dogs lifespan tends to on a shorter side: they normally live up to 6-8 years old.  The lifespan of a Golden Retriever is somewhat longer: they usually reach 10 to 12 years. The good news is that your Bernese Mountain Dog Golden Retriever Mix, thanks to the Golden Retriever part of its genetics, may inherit a preponderance to a longer life than that of a Berner. But, of course, it depends on many, many factors listed above. 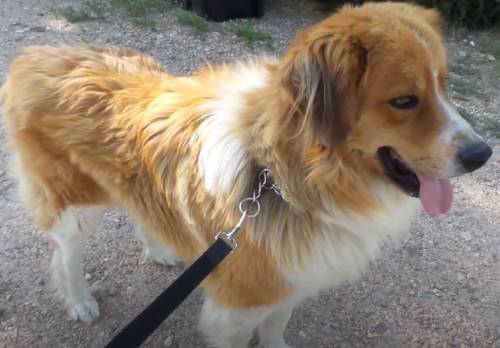 The unfortunate thing about a lot of mixed breeds is that the resulting dog may inherit health issues from both sides of their genealogy, even if the parents are some of the healthier breeds. When it comes to Bernese Mountain dogs, they do have a preponderance for several types of cancer, which, together, are the largest reason for premature deaths among Berners. One of those is Histiocytosis which is a common and aggressive type of cancer that often happens in Bernese Mountain Dogs.

Other diseases include degenerative myelopathy and hip dysplasia. All of these conditions affect the Bernese Mountain Dog lifespan and can be inherited by your Bernegol.

When it comes to the Goldens, they have a few conditions of their own that may seriously reduce their lifespan and decrease the quality of the dog’s life and well-being. Those include, for example, retinal atrophy which may lead to blindness. They also tend to have quite a high incidence of cancer, including Lymphosarcoma, Mastocytoma and Osteosarcoma, all of which can be very aggressive and hard or impossible to treat. 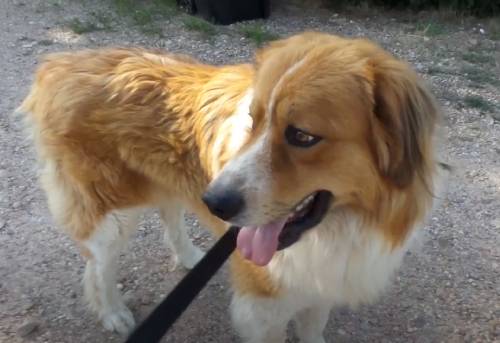 Both Bernese Mountain dog and Golden parents need to be genetically tested to see if they have or are carriers of the common genetic diseases.

Hip dysplasia is also not uncommon, just as with Berners. Von Willebrand disease (VWD) is another common, genetic blood disorder in Goldens which isn’t that common in Bernese Mountain Dogs. Von Willebrand disease can cause excessive bleeding if your dog gets any trauma. Your dog may also have nose and gum bleeds, and worst of all, internal organ bleeding.

Both Golden’s and Bernese, and as a result, your Bernese Mountain Dog Golden Retriever Mix can have cataracts, which develop around 5 years of age and can seriously hamper the dog’s quality of life. Hypothyroidism is also not uncommon. Goldens are also extremely prone to skin conditions, such as dermatitis, allergies, bacterial invasion due to their thick, long coat. If you are not feeding your dog right or if something in the food is causing allergies, your dog may suffer from skin allergies which cause itchiness and eventually sore spots that need to be treated.

All of these conditions can, unfortunately, be inherited by your pup from both sides of its genealogy. Keep that in mind when you are looking to adopt this particular Bernese Mountain Dog mix. It’s not always a “mixed breed vigor” – it is often a “mixed breed disease combo” that you might have to deal with.

What can you do to avoid such a situation?

This is where good breeding is extremely important. Both Bernese Mountain dog and Golden parents need to be genetically tested to see if they have or are carriers of the common genetic diseases. They also need extensive health tests.  Two healthy parents, including genetically healthy (aka they are not carriers of genetic diseases) will likely produce a healthy and happy puppy that will enjoy an active, long life without disease. Don’t we all wish for that?

To ensure that this is the case, you as the future owner need to do your homework and research Bernese Mountain Dog Golden Retriever Mix breeders in your area (or perhaps in other states/areas as the mix is not that widespread yet) and see what their health guarantees are and what measures are in place to prevent litters that may have or carry genetic conditions.

Don’t be afraid to ask your breeder lots of questions, and to demand documented proof of testing that was done. Ask them how healthy the parents of the puppies are. How long have the dogs in their lineage normally lived and why they died? (Was it an old age death in their sleep or was it a health issue that took the dog’s life?) Your upfront work with the breeder, far before you even decide to get a puppy from them, is your insurance for a happy future with your dog, which is especially important with mixed breeds.

You don’t want to end up in a situation where the dog’s health issues will be breaking your heart for years, let alone vet bills breaking your family budget!

All in all, a Bernese Mountain Dog Golden Retriever Mix is a happy, outgoing and easy to train dog that will probably be a great addition to your family. Mixing some awesome traits from both Bernese and Golden, it is definitely a unique “mixed breed” that should have a sweet personality, high energy levels, excellent “work ethics” (easily trainable, willing to please and wanting to do whatever tasks you want to offer them). And did I mention the unique looks of this breed?