Today I am interviewing James from Portland, Oregon, and Chucky, a 1.5 year old Berner.

Why did you adopt a Bernese Mountain Dog?

My wife and I have been thinking about getting a pet ever since we got our first house 3 years ago. She decided she wanted a dog, and we have been researching a breed for quite a while before we even learned about Bernese Mountain Dogs. We haven’t even met them in real life before. After we learned more about this breed and what we could expect from them, we decided it was the right breed for us.

We spent some time looking for a breeder and found one not too far from Portland. They didn’t have any puppies just then, but were to have a litter later that year. We asked to be put on the list and began waiting.

Four months later the puppies were born, and we could meet them for the first time a few weeks after that. That was when we picked out our boy Chucky, and left the deposit. We kind of knew he was our boy right away. He sort of hung out at my wife’s feet all the time during our visit and wouldn’t leave, while other puppies were interested in each other or other things in the room. We waited another month or so until Chucky was old enough to finally take him home with us.

What were your first impressions of your new puppy?

We thought he was a bit crazy! He was kind of one way when we saw him at the breeder’s. I guess he was used to the house and the environment there. But when we brought him home, he started running around everywhere like crazy, sniffing everything out, looking at everything. We were worried he’d pee all over the place so tried to run after him, but he was very fast. We had to put him on a leash right there just to try and keep him near us at least at first.

He calmed down a bit once he got somewhat used to the place. But seriously, he was pretty nuts at first. When you lok at an adult Bernese Mountain Dog, walking calmly next to their owner – yeah, I wouldn’t expect that from a puppy. They are little hellions!

How is Chucky now?

He is the best dog ever. I guess he’s ours, so we really love him. We might be a little biased. But he really is great. He’s just mellowed out enough to be very pleasant to be around. He’s beginning to be really good on leash, and knows lots of commands. “Sit”, “Fetch”, all that, but he can also bark on command, lie down, jump up, a few other things. He loves playing fetch in the park.

He is an awesome hiking companion. There are lots of great trails here around Portland, and we always take him with. It’s so much more fun to go anywhere with him than without. He tends to impress people, too. They ask what breed he is, etc. He is pretty well-behaved too, although we cuold have probably put more time into training him. But we are just sort of lucky in that he has this great temper on his own. 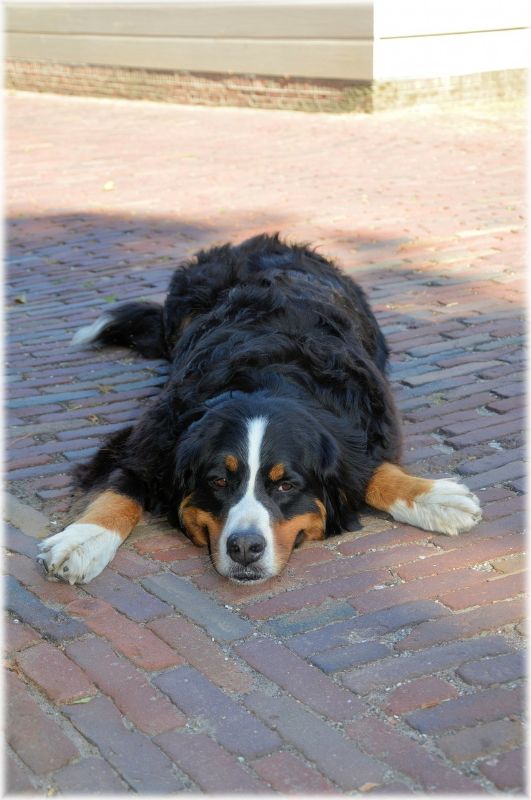 What’s the hardest thing about having a Bernese Mountain Dog?

There’s nothing that hard, really. Well, they shed. Chucky sheds lots! Lots and lots. Sometimes we wonder where all that hair is even from, he doesn’t look that hairy. We have to vacuum and clean way more often now than we used to. He had food poisoning a couple times, probably from something he picked up at a park. It can be tough to go on vacation.

We either have to take him with, which isn’t always ideal, or find a sitter. My wife’s mom would sometimes take him in but that doesn’t always work for here. And dog sitters can be great, but they are pricey and I know Chucky misses us, so even though we have a good dog sitter, it’s still hard to leave him behind.

He had a bout of food allergy awhile ago, when he was younger, and it was tough to find what exactly he was allergic to. Turned out it was turkey, so we had to find a food that didn’t contain any, and he got better quickly. Other than that he never seems to get sick, although he did have a couple of ticks at one point. We are a little paranoid that he’ll track them into the house, so we are extra vigilant in that regard.

Bernese Mountain Dogs can be a bit stubborn too.  At least Chucky is. He is very smart, but sometimes, when I need him to do a certain thing or behave a certain way, he’ll be looking at me as if he thinks about what’s in it for him. If I really mean it or not.

But that may be because he’s still a pup. Or maybe just acts like one. Our breeder told us they mature slowly. He’s very smart though! I think he understands a lot of words, and definitely knows when we are talking about going outside. He hears the car whenever one of us pulls in the drive way and runs to the front door to greet that person. It’s really nice.

What’s the best thing about owning a Bernese Mountain Dog?

The best thing about Chuck in particular is probably that he has made our life way more fun than it was. He’s a lot of work for sure. But he also just has this way of making us laugh on the daily, and lighten everything up. He’s like another person in our house, like another family member. Hard to think of him as just a dog. He’s very loyal too, very loving.

He can get distracted when we are outside, especially when he was younger, but he is definitely always watching us both, what we do and say, and it’s obvious he is a part of our pack. He’ll follow us everywhere. He’s very enthusiastic about anything outdoors. He makes us a great company.

But he also can chill inside. He’s actually getting a bit lazier now. And we can trust him way more in terms of not chewing up our shoes or furniture if we leave him in the house alone. He’s good with his crate, and he’s never had a peeing accident in the house since he was about 3 months old! He’s a pretty easy dog right now, and should become easier as he matures even more.

Would you recommend others to adopt a Bernese Mountain Dog?

Well, it depends. A Berner is a large dog. If you have space, like a house, it probably wouldn’t be an issue. But I wouldn’t get a Bernese Mountain Dog if I lived in a condo. Also, they do require a lot of work. They can get bored easily, and cause all kinds of mayhem in the house if you don’t have time for them. It’s like having a baby – you need to make sure you have thought it through and are ready to sacrifice lots of things. It’s all worth it, especially as they mature a little. You get more used to them, fall in love with them and then it’s just a part of your life. But you need to be prepared for a dog like that.

I wouldn’t recommend a Bernese Mountain Dog to someone who is more of a career person, if you are mostly interested in your job and don’t have too much time to spend outside. If you are a very indoorsy person in general, a Berner may not be the best for you. They really do thrive outdoors and not so much in front of the TV.

Otherwise yes, I would definitely recommend a Bernese Mountain Dog to almost anyone. It’s a great, great breed!