Like any mix, a Mini Bernese Mountain Dog will have inherited traits from both of the breeds, creating a somewhat variable dog when it comes to temperament, health and sometimes even appearance. 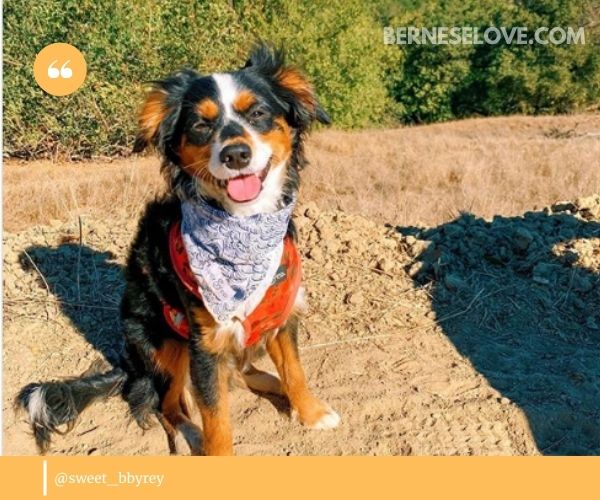 Miniature Bernese Mountain Dogs are generally about the same size as their Cavalier King Charles relatives. They normally weight 5-8 kg (11-17lbs) and stand up to 32 cm tall (12.5”). As with any mix, there may be variations of size and weight in any particular litter/any puppy of the litter. But generally you can expect a medium-sized dog that looks very much like a Standard Bernese Mountain Dog but smaller. This is great if you always admired the royal appearance of Bernese Mountain Dogs but are perhaps intimidated of owning such a large dog. 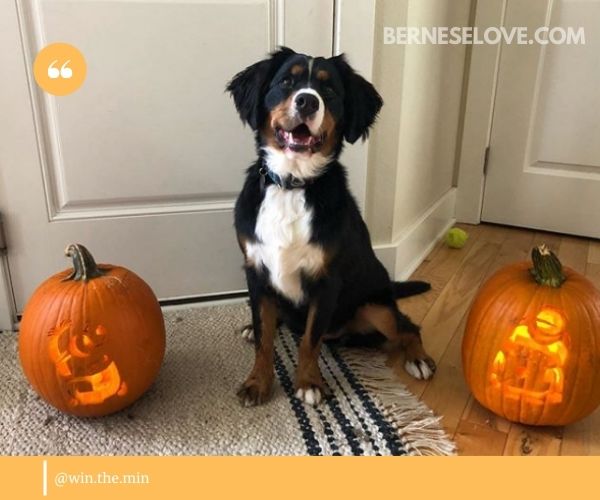 As with any mixed breed, the temperament of the resulting dogs is somewhat of a combo of the character traits common for both parent lineages. Mini Bernese Mountain Dogs in this sense are lucky to have two wonderful breeds in their lineage, which generally gives them very nice temperament and makes them a nice family pet to have.

Another reason Berners are so calm is that they have been intentionally bred to be laid back dogs that could be calm around cattle. They are very good at controlling their impulses even when something does pull them out of their relaxed state of mind. 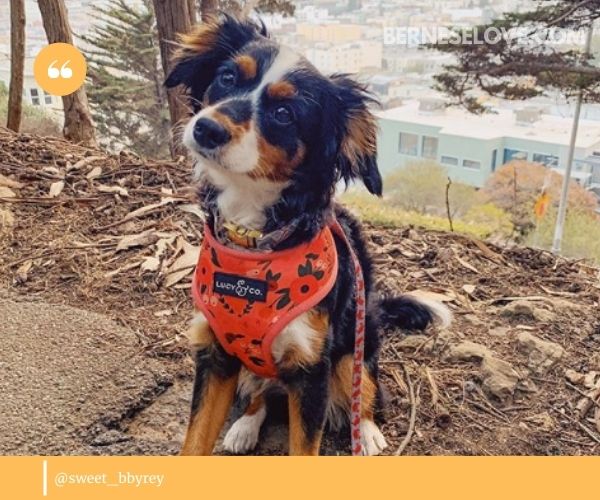 Cavalier King Charles Spaniels, however, are a it more excitable and higher energy than Berners. So, depending on what character traits your Mini Bernese Mountain Dog inherits, they may be more or less relaxed. They may very well have calm, relaxed and laid-back personality of a Berner, but they may also be somewhat higher energy and more excitable, like a Cavalier.

Another aspect of Cavalier King Charles spaniels personality is that they are very attached to their people. Due to their excitable, “sensitive” personality, this attachment can sometimes become somewhat of an issue when it becomes a bit too much. Cavaliers are quite likely to develop separation anxiety if they don’t get enough attention from their owners, or are left home alone for too long. 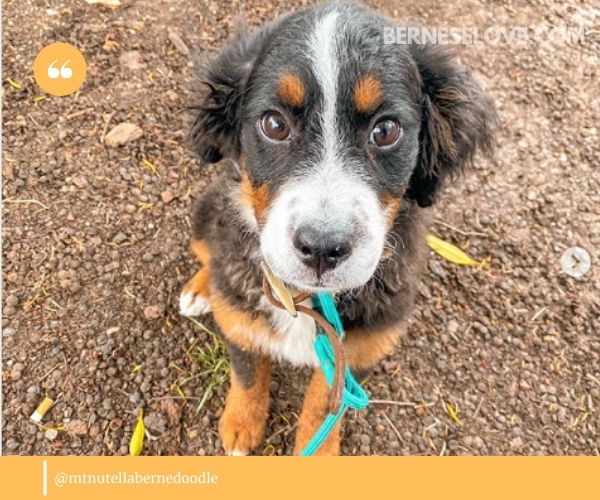 Compared to that, Berners are more independent, although they are very dedicated to their families as well. Separation anxiety is a little less prominent and common in Berners, who have been bred to work with cattle fields and are used to spending some of their time without constantly having their owner in their view. With Miniature Bernese Mountain Dog, you may end up having a dog that has inherited more of the separation anxiety tendency genes from their Cavalier parent. In this case, you need to be prepared to train your pup to be able to handle being apart from you. Either that, or you may need to take your Mini Bernese Mountain Dog anywhere you go 🙂

On the other hand, you may also get a Miniature Bernese Mountain Dog that’s fairly independent and won’t give you any issues with separation anxiety. As always, it’s very hard to predict whether the puppy will have a tendency to be more independent or more co-dependent and you will only find that out after you bring the pup to your home. (Remember though that many puppies, regardless of the breed, can have separation anxiety until they are a bit older.) 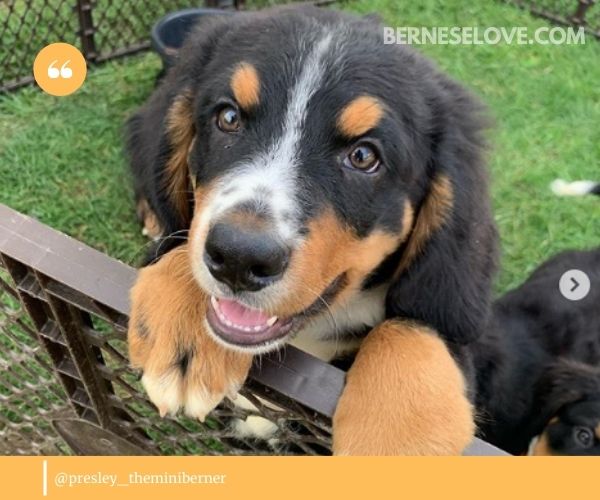 If your Mini Bernese Mountain Dog inherits more of a Cavalier King Charles personality, it will probably be a less independent, more clingy and more energetic dog than a Berner. With a Mini Bernese Mountain Dog, you will have a dog that’s endlessly dedicated, great at warming your lap and chilling with you on the couch and watch Netflix, and will want to be by your side at all times. If you are away from home a lot and don’t have enough time to give to your dog, you can expect a destructive Mini Bernese that might express their frustration by ruining your furniture or peeing in inappropriate places.

Another important point is prey drive. Berners have about zero prey drive, whereas Cavalier King Charles Spaniels do have quite the prey drive. In your Mini Bernese Mountain dog you may get a pup that will bolt from you into the bushes to chase a bird, a squirrel, or a stray plastic bag, while a regular Berner would just walk solemnly by. A higher energy of Mini Bernese Mountain Dog will mean that you will have to spend a considerable amount of time playing with / exercising with your dog – at least an hour a day.

While Bernese are normally very calm and confident, Cavalier King Charles Spaniel can sometimes be shy and not as confident. A mix can inherit either of these traits, so you won’t really know until you get to know your dog better. Generally, you can expect a Mini Bernese Mountain Dog to inherit a happy, outgoing personality from both parents. It will be an energetic little dog who will be best friends with every member of your family including your cat (provided you explain to your Mini Berner that the cat isn’t prey!) 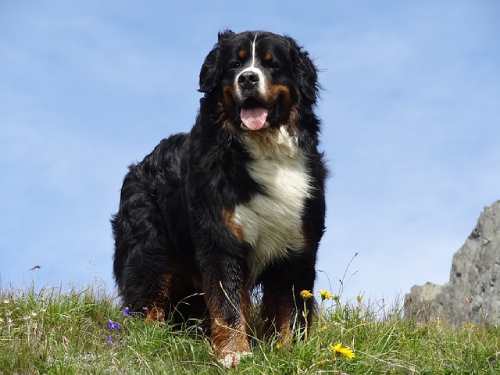 Whenever we talk about mixes, it’s important to consider health implications and the possibility in a mix to inherit health issues from both sides of their parentage. When it comes to Miniature Bernese Mountain Dog health, they should generally be a pretty healthy breed, with a few exceptions.

One issue here is that one side of the Mini Bernese Mountain Dog lineage, the Cavalier King Charles Spaniel, probably can’t be called the healthiest of breeds. They have several major health conditions as a result of their extensive breeding with limited gene pool.

One of the biggest issues with Cavalier health is Mitral Valve Disease, which takes about half of all Cavalier King Charles Spaniel lives. Mitral Valve Disease is a condition affecting the mitral valve of the heart. It normally leads to heart failure and, ultimately, death of the dog. Unfortunately, it can definitely be passed on to your Mini Bernese Mountain Dog. Some of the symptoms of Mitral Valve disease are coughing, difficulty breathing and respiratory distress. There is no cure for Mitral Valve Disease in dogs. 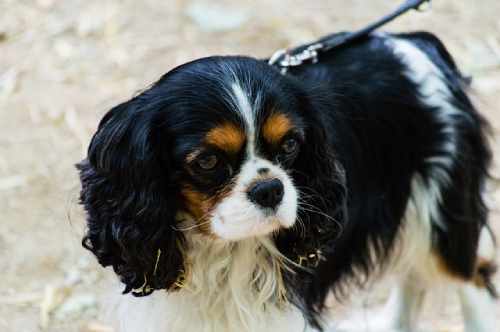 Another rather grave health issue that your Mini Bernese Mountain Dog may inherit from their Cavalier parent is syringomyelia. Syringomyelia (Or Chiari  Malformation) is a condition that  causes pain in the dog’s cervical area of the spine (neck) and can cause structural deformities as it progresses throughout the dog’s life. Some of the most common symptoms of this disease is neck and/or back pain in the dog.

Affected by the pain, your pup may display reduce mobility and unwillingness to walk, jump or climb.  Sometimes, there may be no visible symptoms. Syringomyelia can be diagnosed by MRI. Several types of medications can be used to slow down the progression of the disease and improve the dog’s quality of life.

Epilepsy is another condition often affecting Cavalier King Charles spaniels and can be passed on to your Mini Bernese Mountain Dog pup. The symptoms include seizures and motor issues in the dog and can lead to worsened quality of life and premature death.

An issue that is very likely to crop up in your Mini Bernese Mountain Dog, as it seems to affect both Cavalier King Charles and Berners, is hip dysplasia. Hip dysplasia happens when a dog’s hips form incorrectly, causing further joint problems and arthritis.

Progressive Retinal Atrophy is another condition you may encounter in your Mini Bernese Mountain dog, inherited from their Cavalier parent. It’s a disease affecting the dog’s eye retina, and can lead to blindness. There is no treatment for this disease. 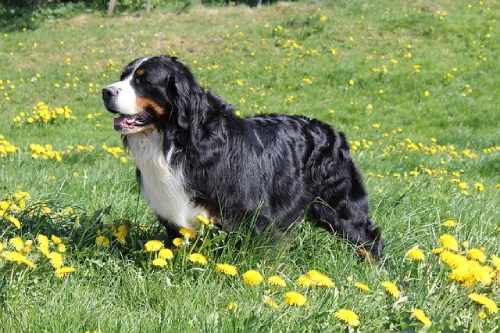 With a Mini Bernese Mountain Dog, you will have a dog that’s endlessly dedicated, great at warming your lap and chilling with you on the couch

On the Bernese Mountain Dog side, there are also a few health conditions that your Mini Bernese may inherit, such as Degenerative Myelopathy. This is an incurable, progressive disease that affects the dog’s spinal cord and can greatly reduce your Mini Berner’s quality of life. Some of the symptoms a dog with Degenerative Myelopathy will display is muscle weakness and loss of coordination, which can progress to difficulties walking or controlling animal’s bowels (incontinence). Eventually, the dog may need to be euthanised as the quality of life cannot be further improved or even maintained at an acceptable level. 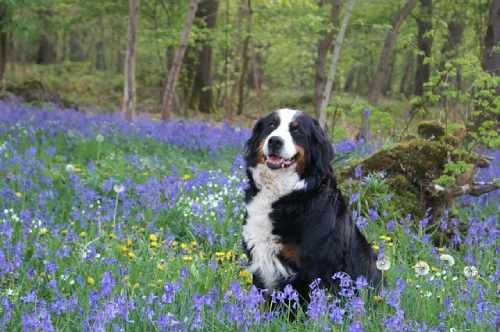 Miniature Bernese Mountain Dogs are very attached to their families

Malignant Histiocytosis, or “histio”, is an aggressive type of cancer that often claims the lives of Bernese Mountain Dogs and can be prevalent in the Mini Bernese Mountain Dogs. Being the major cause of death among Bernese Mountain Dogs, this disease is definitely something to keep an eye on. Some of the symptoms include cough, difficulty breathing, weigth loss, anemia and lack of appetite. A dog with histio will generally only have 2-4 months to live. Although chemotherapy is sometimes used to stop the progression of the disease, the prognosis is generally very poor. 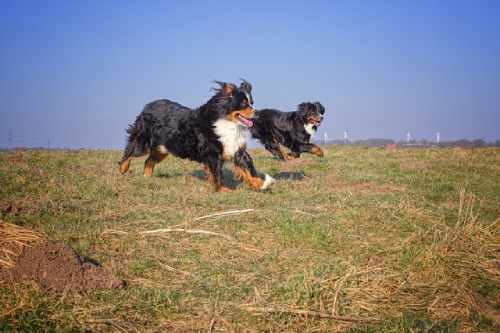 The role of the breeder here is absolutely critical. A good breeder will have done extensive genetic testing on the Mini Bernese Mountain Dog parents to avoid passing any genetic disease from the parents to the new litter. Choosing a good breeder is really the only way to make sure your dog won’t develop serious genetic issues over the course of their life. So do your homework at this early stage, when you are just looking for a breeder. 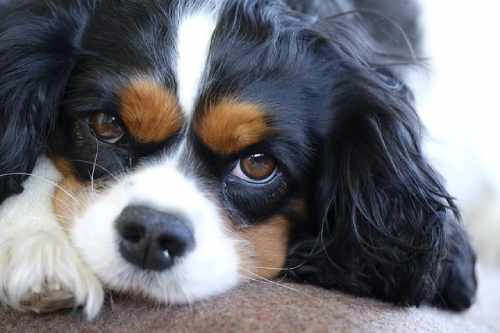 If you want to keep the hair off your furniture and house floor, you will have to brush their coat one to two times a week and more during spring and summer when dogs naturally shed some of their coat. You will also need to wipe their eyes, because, as with Cavalier King Charles Spaniels, their eyes often need cleaning.

As with any dog, Mini Bernese Mountain Dog nails need to be trimmed on a regular basis. You can decide how often you want to bathe your Mini Berner, but it’s best not to bathe them more than once a week to not wash off the protective oil off their coats.

Other than that, your Mini Bernese Mountain Dog will not be harder to groom than any other breed.